Martin Green beat the heat and the hills to win Mulberry half-marathon... 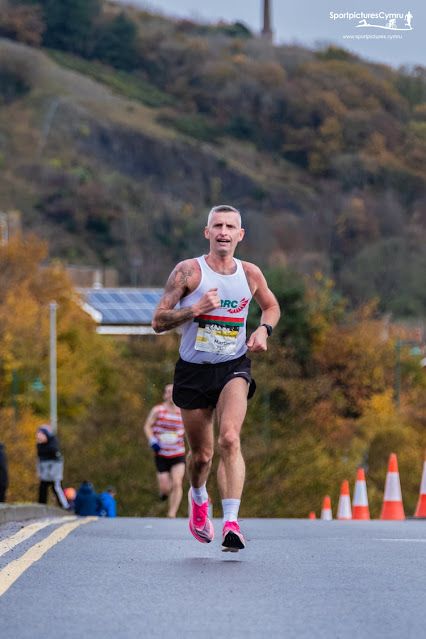 Martin Green beat the heat and the hills to win Mulberry half-marathon...

Road Runner Martin Green was the runaway winner of the tough Mulberry half marathon race last Sunday, and despite the very the warm conditions and an extremely hilly course, he still finished more than three and a half minutes ahead of his nearest rival.

The NWRRC athlete, who has enjoyed some equally superb performances over the same distance in recent weeks, ran home in just 1 hour 22 minutes and 16 seconds to additionally win his MV45 age category.

Martin also led a team of eight club runners over this challenging route, which started and finished on the beach next to Mulberry Marina before crossing into the Snowdonia National Park and included the gruelling long gradient up the Synchant Pass before heading back towards Conwy. 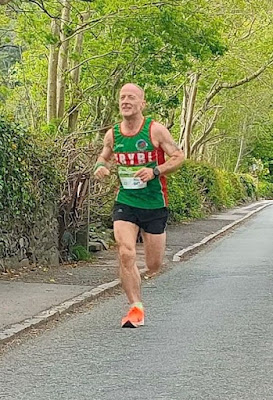 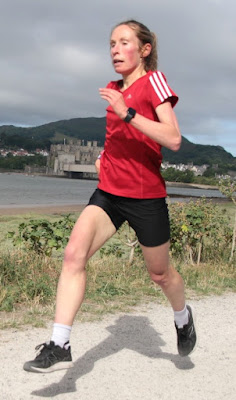 *A great run from Nic Brook (*above left) and the 1st lady from Alice Johnston. 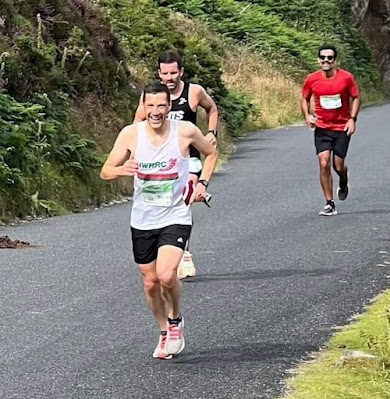 Road runner Stuart Culverhouse was 17th overall with a steady run in 1.43.30, but he just missed out on a podium place finishing 4th in his MV50 cat, and Jamie Tharme made a last-minute decision to enter the race and finished 3rd in his M40 age cat, and in 32nd place overall in 1.54.16. 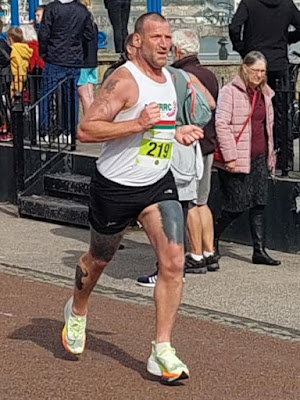 *Jamie Tharme (*above) only entered at the last minute but came 3rd in his age cat, and (*below) Steve Roberts finished 2nd in his cat with a great effort. 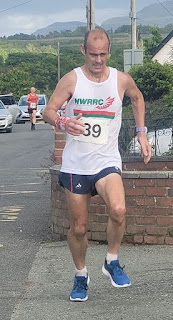 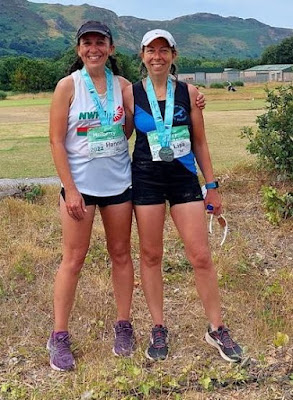 *Hannah Griffith (*above) left ran in the half-marathon with her sister Lisa.

Cai Roberts, Kelly-Marie Alford, and Vicky Taylor ran much of the race together and they all finished together, with Cai in 100th place, and Kelly the 25th female, and Vicky 26th in 2.28.39.

*This is the link to the provisional results from the Mulberry half-marathon: 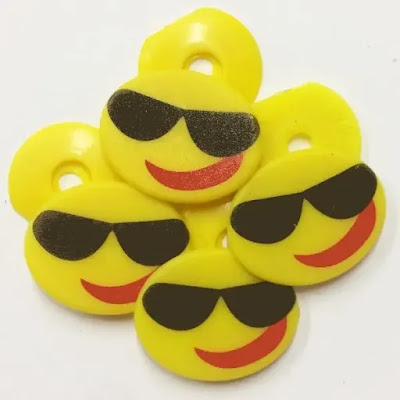 An inventive former runner designs unique alternative to safety pins for securing race numbers to clothing – No more pins, No more holes! Special feature report by Don Hale.  *Included some examples of varied stock.   An award-winning sports enthusiast, who is also a creative designer and inventor, has finally  solved an age-old problem dating back more than a century, to finding a new and realistic alternative to using safety pins, whilst trying to attach a competitor’s race number to clothing. The problem of athletes still using old-fashioned safety pins in this modern age at major athletics, cycling, triathlon, or sporting events, and the potential damage caused by them, was discussed live on BBC television recently by former Olympic champions  Steve Cram  and  Michael Johnson  during the  World Athletics Championships in America  in July, yet they failed to appreciate that a viable alternative IS NOW available! Exciting innovations Ex-runner Mike Drage from his Shrewsbury based fir
Read more 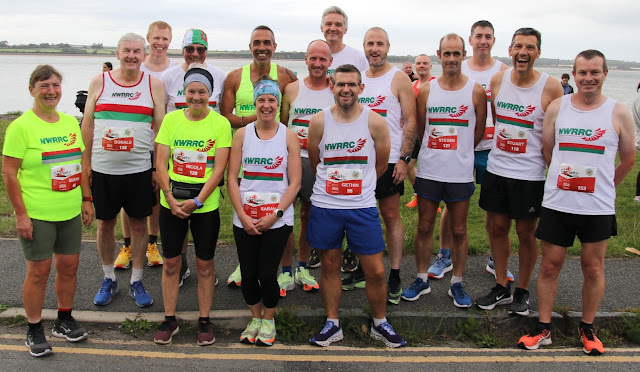 *Some of the highly successful Road Running team at the Caernarfon 10k and North Wales championships last Wednesday night. Six gold medals for the Road Runners at Caernarfon 10k championships. Report by Don Hale. Photos by Steve Jeffery.   It was another great turnout of talented runners at the midweek Caernarfon 10k race last Wednesday night, which attracted nearly two-hundred entrants for the main race, and the inclusive North Wales championships. Run on a bright, sunny, and humid evening, and heading out towards the harbour and the magnificent ancient Castle, a large number of elite and top club runners soon battled for glory on this undulating course, with the eventual winner  Adam Jones  (Eryri Harriers) finishing in 33 minutes 19 seconds, and just 20-seconds ahead of rival  Scott Nixon  (Cardiff AC) in 33.39, with  James Yarwood  (Abergele Harriers) in close pursuit, and only another 7-seconds adrift in 33.46. The Road Runners  turned out in force again for this second major NW c
Read more 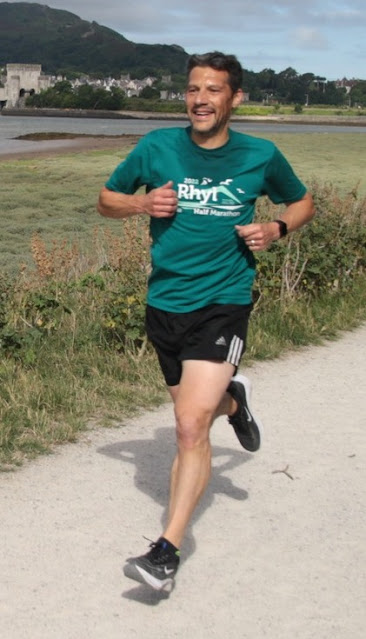 *Stuart Culverhouse (*above) was the first NWRRC back home at Conwy. Three age cat wins for Road Runners at bright and breezy Conwy parkrun. Report by Don Hale. Photos Steve Jeffery.   It was bright and breezy at Conwy parkrun last Saturday where an increased number of top club and social runners enjoyed the excellent weather to record some fast times and new PBs. Adam Jones  was the first man home over this picturesque 5k course in just 16 minutes 59 seconds, with  Tom Carter  just 3 seconds behind, despite a new PB time of 17.02, with  Osian Griffiths  3rd in 18.59. The first lady was the speedy  Alice Johnson  (Les Croupiers), who finished 7th overall in 19.27. *Pictured above, super master vets Sandy  Johnston  (*left) and Roger Harrison Jones both ran well at the Conwy parkrun. The parkrun attracted another bumper turnout of 234 runners from across the UK, and it also welcomed back a couple of remarkable ‘super’ veterans in  Sandy Johnston  (Les Croupiers), a highly respected MV70
Read more

Race results and round-up for NWRRC endurance runners and other events... 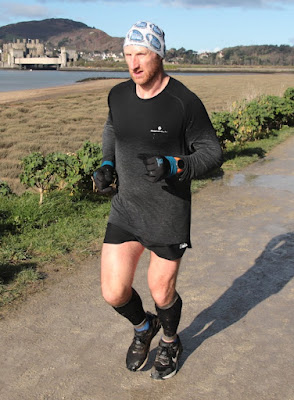 *John Dalzell (*above) completed the tough West Highland's Way race. SOME GREAT RESULTS ON THE ROAD FROM NWRRC ATHLETES: *Scotland: John Dalzell  took part in the  ‘Devil O the Highlands’  footrace. John was the 2nd Welsh finisher, and he was 146th out of 274 runners who eventually completed this tough 68k plus ultra-event in an amazing time of 9 hours 18 minutes and 30 seconds.  After the race, John confirmed: “West Highland Way done in two shifts. Today’s effort was an easy 21-miles in the rain, the second 21 starting with the Devil’s staircase, which I’m sure was steeper and longer than last time, followed by the undulating military road. The legs weren’t impressed, but I kept smiling.” *Steve Bozier (*above left) and Steve Poupart ran in the Coastal Marathon. *Anglesey:  Two NWRRC endurance athletes took part in the  Cybi Coastal Marathon  on Saturday, but both struggled with injuries.  Steve Bozier  battled with a hip problem after 15-miles but still finished well in 18th plac
Read more 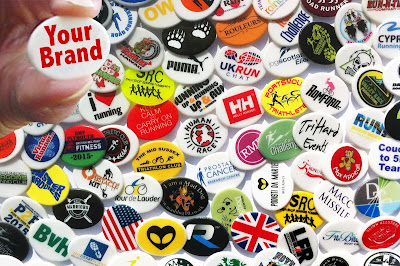 * The Snap-Lock Bibclips provide unique opportunities for sponsors. A former sportsman has invented a unique alternative to safety pins for securing race numbers to clothing – No more pins, No more holes! Special feature report by Don Hale. An award-winning former sportsman, who is also a creative designer and inventor, has finally   solved an age-old problem dating back more than a century, to finding a new and realistic alternative to using safety pins, whilst trying to attach a competitor’s race number to clothing. This  remarkable  invention and coupled with some new and fascinating designs could now change athletics, and all competitive sports forever, and they have already been used by top ex-star athletes Dame  Kelly  Holmes, Shannon Hylton, and Vassos. This bizarre problem of athletes still using old-fashioned safety pins in this modern age at major athletics, cycling, triathlon, or sporting events, and the potential damage caused by them, was discussed live on BBC television
Read more 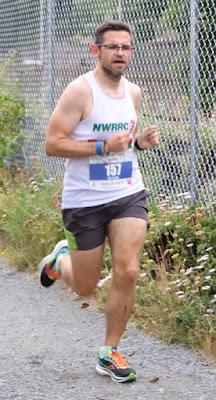 *Gethin Wyn Jones was the first NWRRC finisher at Conwy. Close finish for athletes at Conwy parkrun. Report by Don Hale. Photos by Steve Jeffery.   Just over 200 runners took part in last Saturday’s Conwy parkrun, with the leading pair of elite athletes battling all the way for the top-spot, and they were only separated on the line by just one second over this challenging 5k course. Rivals  Adam Jones  and  James Yarwood  (Abergele Harriers) raced nip and tuck throughout, with Adam eventually finishing 1st, with a sprint finish, in a very fast time of 16 minutes and 57 seconds, with James, despite recording a great new PB, having to be content with 2nd place in 16.58.  In another quick dash event, the first nine runners all dipped under the 20-minute barrier, and three out of the first four finishers recorded new PB times.  North Wales Road Runners  only entered four members this week due to several fixture clashes but still recorded three podium age cat places, including two excellent
Read more 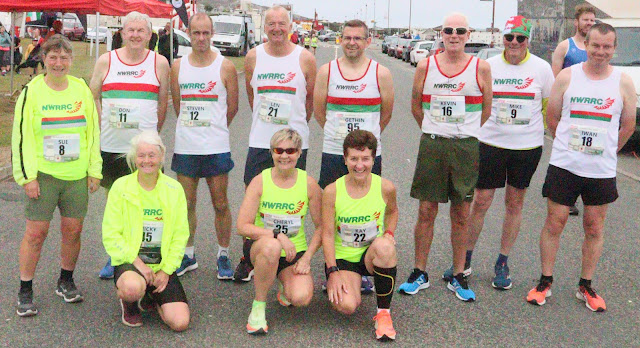 *Some NWRRC team members at the Holyhead 5-mile race and NW championships. Medals galore for Road Runners in North Wales 5-mile Championship race at Holyhead. Report by Don Hale. Photographs by Steve Jeffery and John  Hatton.   The Holyhead Breakwater 5-mile race attracted a talented mix of over one-hundred elite and club runners for another exciting event following a three-year absence due to Covid-19 restrictions. Well organised by Kevin Clark and his team at Cybi Striders as part of the Holyhead Festival and run over a challenging out and back course from Newry Beach, this year’s race was additionally selected as part of the North Wales championships, and despite some breezy conditions along the long Breakwater barrier, many athletes still recorded some excellent times, and won prestigious medals. The overall race was won by  Alex Poulston  (Wirral AC) in 26 minutes 51 seconds, with  Sam Gunning  (Cybi Striders) 2nd in 27.06, and  Ian Edwards  (Eryri Harriers) 3rd in 28.03.  The fir
Read more 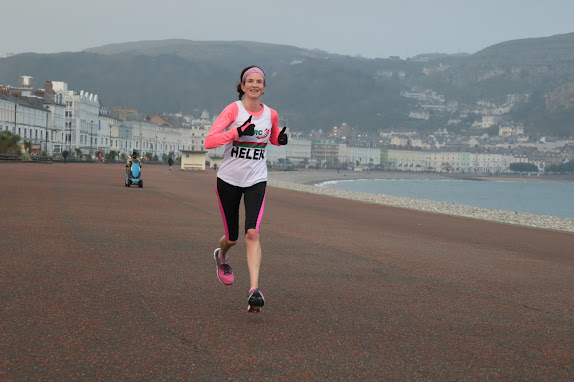 *North Wales Road Runner Helen Hannam will be one of many athletes competing in the global Dawn till Dusk charity challenge on Saturday Green, global challenge from ‘Dawn to Dusk’ Relay teams of North Wales based runners, walkers, and cyclists are preparing to take part in an unusual ‘Dawn to Dusk’ green, global charity challenge this Saturday to see how many kilometres they can complete within a 12-hour period. A number of targets have been set for each of the different activity sections, offering branded coloured wristbands, and beautiful natural wooden eco medals to finishers, along with spot prizes and special awards to category winners. The object is to find the teams who can complete the longest distances worldwide with donations given to Mind, Sporting Equals, or NHS Charities.  All finishers will also have the option to collect a special medal with an Ultra X logo in the centre, and/or to make an additional donation to the organiser’s sustainability partners,  Mossy Earth , who
Read more

Fast dash to ‘Race the Train’ at Caernarfon. 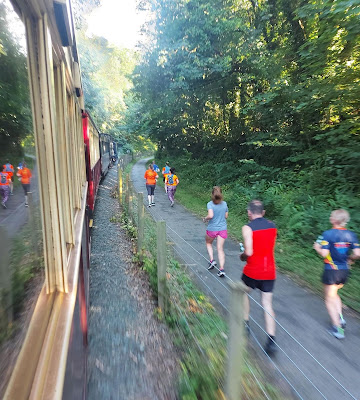 *A passenger's view (*above) of runners as they attempted to 'Race the Train,' at Caernarfon last  Wednesday night. Fast dash to ‘Race the Train’ at Caernarfon. Report by Don Hale. Most photographs by Steve Jeffery. The popular ‘Race the Train’ event proved to be an enjoyable summer dash for two hundred and fifty-eight runners last Wednesday night with more than half the starters finally managing to beat the Highland locomotive and its entourage back to the start at Caernarfon. The unique 5k course in perfect weather conditions led to a very fast downward dash for a mixed entry of local elite club and social runners with seventeen athletes dipping under 17-minutes, and 47 people in total beating the magic 20-minute mark. The race was eventually won by  Luke Northall  (Wrexham AC) in 15 minutes and one-second, and he was just 7-seconds ahead of rival  Tom Roberts  (Meirionnydd) in 15.08, and  Math Roberts  from hosts (Eryri Harriers) in 15.24.  North Wales Road Runners  ente
Read more

WRITERS ON THE ROAD 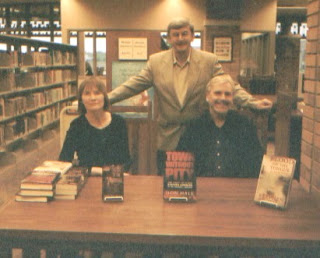 Danuta Reah, Don Hale and Stephen Booth at a US library during their book tour THREE BRITISH AUTHORS AND A TROUBLESOME LIMO HIT THE ROAD IN THE AMERICAN MID-WEST DURING THEIR PROMOTIONAL BOOK TOUR This new introductory update is written by Don Hale, and the following report is reprinted by kind permission from Danuta Reah’s own blog:  www.danutareah.co.uk It is the nostalgic archive story of a memorable and amusing book promotion trip to America in June 2003, that I was fortunate to attend with best-selling authors Danuta Reah and Stephen Booth.   This was an exhaustive journey across numerous States, travelling across many confusing time-zones, flying in rickety planes in terrible turbulence, or driving for hours on end in a very confusing limousine, which always had a mind of its own, and yet thankfully never seemed to need much gas! Written originally by Danuta on her own blog, this week, I suddenly discovered a pack of old photographs from our tour, at which we gave endless repeate
Read more