North Wales Road Runner Carla Green was the first female finisher at the Rhyl half-marathon last Saturday and celebrated her return from injury by smashing her age category record over this distance.

Carla set a new NWRAC ‘all-time best’ record by completing the sun-drenched and breezy course in just 1 hour 28 minutes and knocked a minute and a half off an impressive record that had stood for more than ten-years!

This popular event attracted over 250 quality athletes and the ultra-flat promenade route encouraged everyone who was intent on claiming new personal best times. 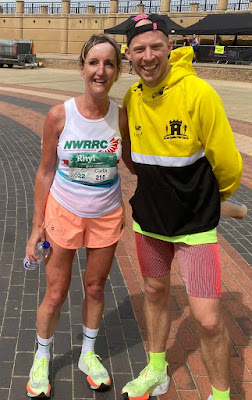 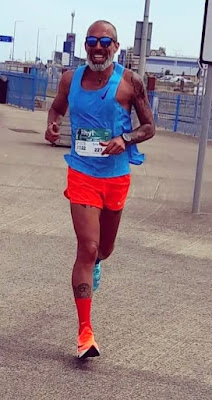 *Another great performance from Steve Forsyth (*above) at Rhyl. 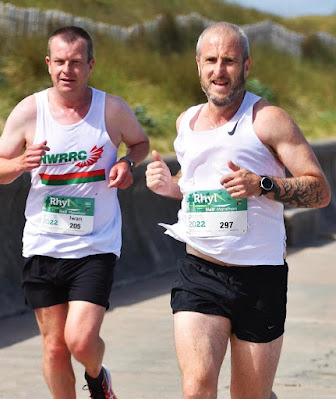 *Iwan Evans (*above left) with Will Williams.

Carla Green was the 1st Lady finisher in 15th place overall and she won her VW50 age cat in 1.28 in record time. Stuart Culverhouse was additionally in fine form and claimed 3rd place in his MV50 cat in 1.32.50 in 29th place, whilst Steve Roberts continues to impress with another good run finishing in 48th place and 3rd MV55 cat in 1.37.19. 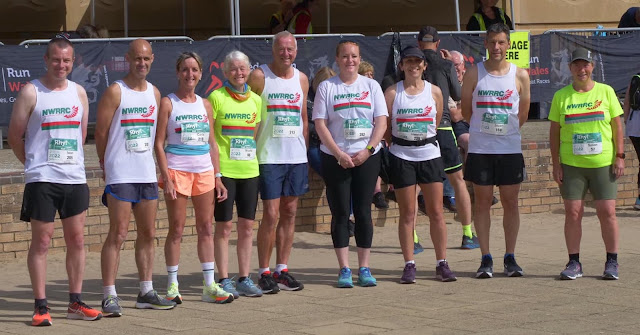 *Above and below some members of the NWRRC team at the Rhyl half-marathon. 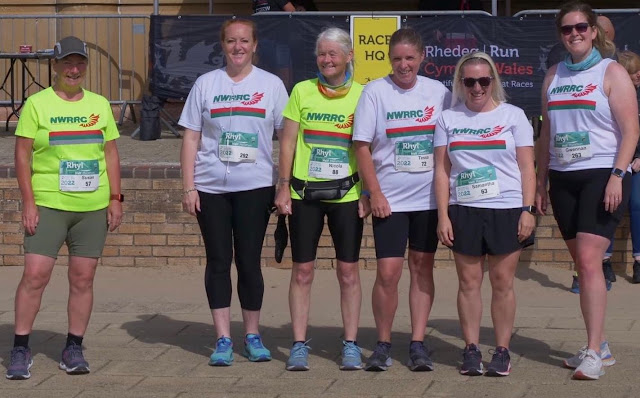 Cheryl Frost was another age cat champion in great form, finishing 68th overall, and 1st in her VW55 cat in 1.43.48 as the 8th female athlete. And Nicola Wylie was another star on the day recording her best-ever half-marathon PB, finishing 114th overall, the 19th female runner, and 4th in her FV50 cat in 1.53.21. 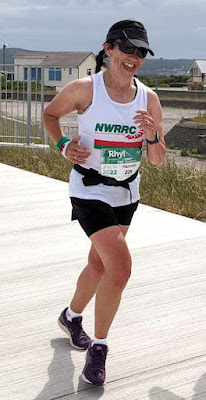 *Hannah Griffith (*above left) with Stuart Cuverhouse, enjoyed a run in the sun. 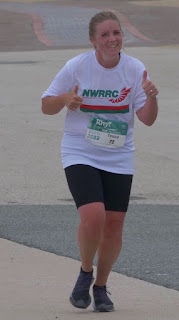 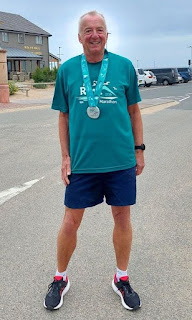 Bumper turn-out at Felinheli for return of the 10k Festival race.

July 01, 2022
*Iwan Evans, Gethin Wyn Jones and Rory Middleton at the start of the race. Bumper turn-out at Felinheli for return of the 10k race. Report by Don Hale.  Photographs by Natasha Kettle and Gwyl y Felinheli Festival.   The Ras Gwyl Felinheli Festival 10k race returned with a bumper turn-out last Wednesday as nearly 250 top club and social runners took part in this challenging event on a warm and near perfect evening. Delayed since 2019 due to numerous pandemic restrictions, this is probably one of the toughest half-marathons in North Wales with competitors having to battle a very challenging course and run mainly off-road, and along numerous steep trails, and through dense woodland. The overall race proved very tight at the sharp end with  Adam Jones  from event hosts Eryri Harriers, eventually taking the honours to win in 32 minutes and 57 seconds, with  Tomos Jones  (Meirionyydd RC), 2nd in 33.14, and  Ifan Dafydd  3rd in 32.26. The Ladies race winner was  Anna Bracegirdle  (Sale Harrie
Read more 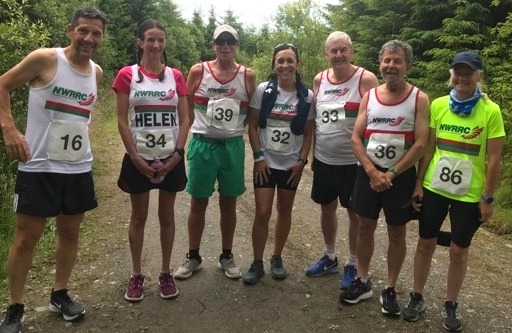 *Some of the NWRRC team prior to the start of the Fairy Freckled Cow race (*pictured l-r) Stuart Culverhouse, Helen Hannam, Kevin Higgins, Hannah Griffiths, Don Hale, Mike Hayton and Nicola Wylie. Podium places and NW medals for Road Runners at Fairy Freckled Cow Trail race. Report by Don Hale.   It was a great turnout of experienced club athletes and a few social endurance runners at the very tough Fairy Freckled Cow 10.7k trail race last Sunday morning. The Road Runners entered eight members and collected four podium places and a few PBs, in addition to several North Wales Trail championship medals, at one of the most challenging trail races in the region around Alwen Reservoir. Despite spectacular views, this race followed a gruelling and very hilly course, with the event eventually won by  James Yarwood  (Abergele Harriers) in 40 minutes 21 seconds. He was followed by  Stephen Skates  (Prestatyn RC) in 41.15, and  Ian Edwards  (Eryri Harriers) 3rd in 41.24. The Ladies race was won
Read more 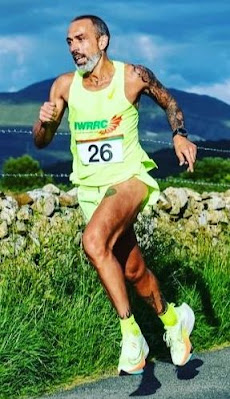 Steve Forsyth (*above) finished 1st at a bright and breezy Conwy parkrun. Report by Don Hale. Photos by Steve Jeffery.   It was bright and breezy for 179 finishers at Conwy parkrun last Saturday with numbers heavily depleted due to several fixture clashes, or athletes recovering from some midweek exertions. Ten Road Runners took part with  Steve Forsyth  the 1st placed finisher in 18 minutes dead, to additionally claim the top-spot in his MV40 age cat. Steve just managed to hold off a strong challenge from promising youngster  Math Thomas  (Menai Track & Field) who was the runner-up with a fine performance in 18.23, and the winner of his JM15-17 cat, with  Dave Hughes  3rd with a PB in 18.30. *Will Williams (*above) had a good result, finishing 5th at Conwy. The NWRRC team  claimed three other age cat wins and  Will Williams , who finished 5th overall, also won his MV45 cat with a new PB of 18.54. And  Steve Mason  was back on home ground again and finished 8th overall and 3rd in h
Read more

Chance meeting at Tesco led to Beverly donating funds to Deganwy Dash cancer charities in memory of her mother. 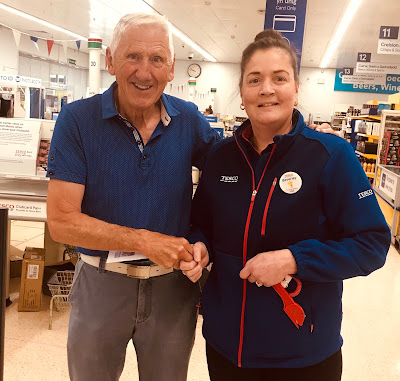 *Deganwy Dash race official John Hatton (*above) with Beverly Miles Chance meeting at Tesco led to Beverly donating funds to Deganwy Dash cancer charities in memory of her mother.  Report by Don Hale.   A chance meeting in Tesco at Llandudno Junction this week by joint Deganwy Dash race official John Hatton with checkout worker Beverly Miles led to a surprise but welcome cash donation towards children’s cancer charities. John, who has helped to organise and promote this popular 5-mile Dash for many years with NWRRC colleague Carla Green, said this year’s event, which will be held tonight (Friday 24th June) at 7pm, will now be known as Rohan’s Run, in memory of an extraordinary young student, Rohan Ingley, who tragically  lost his long battle with leukaemia in August 2018, aged just 17. *Rohan Ingley (*above), who tragically lost his life in August 2018. Rohan from Abergele, was a highly talented all-rounder, who excelled at sport and music, and was a very popular student at the King’s
Read more 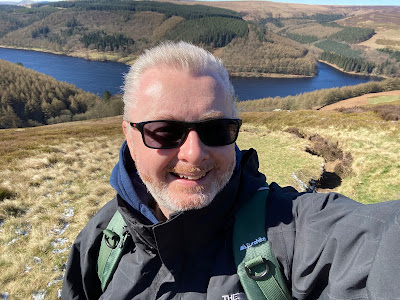 *Andrew Hale (*pictured above) is preparing for his tough challenge. Fundraising charity walk up Kinder Scout for Bluebell Wood Hospice. Report by Don Hale. My eldest son Andrew Hale is fundraising for Bluebell Wood Children's Hospice . Check out their @JustGiving page and please donate if you can. Thank you! https://www.justgiving.com/fundraising/halopeaks?fbclid=IwAR2NQHTIKyLhRhvmIuWg1Vg_WukYg7mQjXZb0FgLqZGYqoVEvs0ohlbUYKY On Friday (July 1st) Andrew and some colleagues will be helping to raise money for Bluebell Wood Hospice by walking up Kinder Scout (Highest Peak in Derbyshire) with colleagues.  Bluebell Wood is an amazing place for families who need care and support at the most difficult times in their lives.  *If you have 5 minutes read some of the stories here: https://www.bluebellwood.org/Listing/Category/stories  it  really brings home what they do! So please help me and all my colleagues raise a huge amount of cash to help keep the hospice open for many years to come! h
Read more 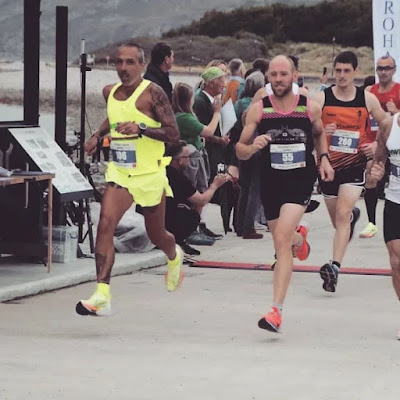 *The start of Rohan's run with Steve Forsyth (*left) and Simon Cole and (*below) Martin Green and Josh Keogh, ahead on Nic Brook and Iwan Evans. Rohan’s Run raised over £7,000 for Children’s Cancer Charities. Report by Don Hale. Photos by Steve Jeffery and Sandra.   Over £7,000 was raised for a children’s cancer charity last Friday night at Rohan’s Run in Deganwy, which attracted nearly three-hundred runners, who helped to commemorate the life of an extraordinary young student, Rohan Ingley, who tragically lost his life to leukaemia in August 2018, aged just 17. Originally named the Deganwy Dash, this popular race changed its name a couple of years ago in tribute to Rohan, from Abergele, who was a remarkable scholar and a very keen sportsman.  The event however has had to be postponed several times due to the Covid-19 pandemic and this year has been the first time since 2019 that it’s been possible to stage the race in his name.  Celebrated classical Welsh soloist Sioned Terry also
Read more

Wild, wet, and windy for Bangor 10k and half-marathon. 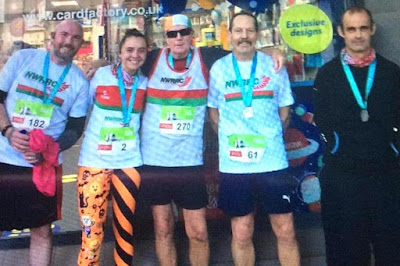 *The NWRRC team who ran in the Bangor 10k race last Sunday. (*pictured l-r), Cai Roberts, Kelly-Marie Alford, Kevin Higgins, Rob Fryer and Steve Roberts. Wild, wet, and windy for Bangor 10k and half-marathon. Report by Don Hale. Most photographs by Steve Jeffery.   Just over four-hundred determined runners took part in the Bangor 10k and half-marathon events last Sunday morning amidst wild, wet, and windy conditions which followed a very hilly, muddy, and rain saturated course. North Wales Road Runners entered five athletes in the 10k event with another two members in the half-marathon. Despite this challenging weather, the club still celebrated two podium placings in their respective age categories in the shorter race, and  Helen Hannam  snatched 3rd spot in her age cat in the half-marathon. *Helen Hannam gained a podium place in her age cat in the half-marathon. Steve Roberts  performed well again to finish 27th in the 10k run, and he was also 2nd in his VM55-59 age cat in 44 minutes
Read more Tired legs but four age cat wins for Road Runners at Conwy parkrun - plus other race results. Report by Don Hale. Photos by Steve Jeffery.   There were many tired legs at the Conwy parkrun last Saturday with numerous Road Runners and other local athletes still recovering from their Friday night 5-mile charity ‘Dash’ at Rohan’s Run in Deganwy. Despite being something of a recovery run, eight seniors and two junior members of NWRRC still turned out amongst the 168 finishers and collected four age category wins.  And it proved to be a memorable occasion for young  Alfie Shiland  (Colwyn Bay AC) who claimed his first ever parkrun victory with a great new PB over the 5k course in 17 minutes 39 seconds and 1st place in his JM11-14 age cat. Alfie was always in the mix with club rivals and eventually outsprinted the field to celebrate his win after four previous efforts as a runner-up.  The Ladies title went to the very talented  Alice Johnston  (Les Croupiers) with a great new PB of 19.19, ju
Read more

Josh Keogh led the team to success at Conwy parkrun. 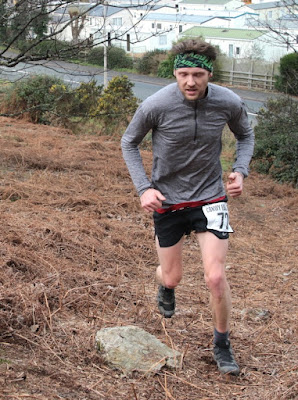 Josh Keogh (*pictured above) led the team to success at Conwy parkrun. Report by Don Hale. Most photos by Steve Jeffery. North Wales Road Runners had three athletes within the top four finishers at Conwy parkrun last Saturday and claimed six age category wins during another well attended and sun-drenched event. This popular 5k event again attracted numerous Bank Holiday runners from across the UK to sample the delights of this spectacular riverside course with many of the 216 finishers also recording PBs. Josh Keogh  led the club team, and he was the first runner home overall, and celebrated victory as the 1st SM30 cat winner in just 17 minutes and 19 seconds. He was closely followed by club colleagues  Jonathan Kettle  in 2nd place and 1st MV45 in 18.03, and  Steve Mason  4th, and 2nd in his MV45 age cat in 18.55. *Jonathan Kettle (*above) finished 2nd at the Conwy Parkrun. Steve Roberts  won his MV55 cat finishing 21st overall in 21.26, with  Sean Butler  continuing his good form to
Read more 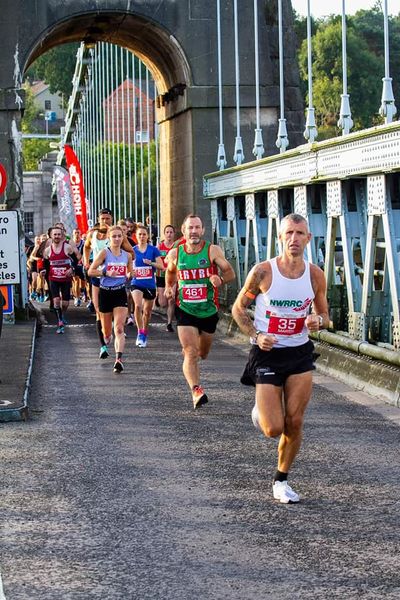 *Martin Green leads the pack across the  Menai Suspension Bridge. Victory for Martin Green at Anglesey half-marathon race. Report by Don Hale.   Martin Green won the prestigious Anglesey half-marathon race last Sunday morning following a fierce battle with several keen rivals.  The North Wales Road Runner, who is hard in training for the forthcoming London Marathon, finally finished more than 30-seconds ahead of second placed local runner  Steffan Sayer  from the Menai Track and Field club, to win in 1 hour 13 minutes and 44 seconds, with 3rd place going to local athlete  Anna Bracegirdle , who also set a new all-time female best time NWRAC record of 76.07, by over a minute, which had stood since 2015.  Martin was one of five NWRRC runners who took part in this re-arranged event following previous Covid-19 restrictions, and four members of the team also won age category honours. *Kevin Slattery won his M65 age category at the Anglesey half-marathon. Martin claimed 1st place in his MV45
Read more