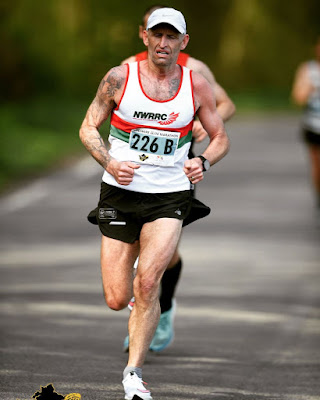 Top North Wales athlete Martin Green had to battle with hot temperatures and stiff competition as he returned to ‘live’ racing on Sunday during the Cheshire Elite Marathon.

A tough, determined and experienced long-distance competitor, Martin was one of 275 invited high-calibre entrants who competed in one of the first few live endurance runs now permitted in England due to the partial lifting of strict pandemic restrictions for outdoor sports events.

Run over a fast and flat lapped course over rural Cheshire roads around Pulford, this race also incorporated the former Wrexham Elite Marathon, with entry only available to male athletes capable of running 2.40 or quicker for a marathon, and female athletes running a sub-3.00-hour time.

Martin matched this criteria and performed well despite the challenging conditions, and was 49th overall, recording an excellent time of 2 hours 30 mins 8 seconds. In addition, he just missed out on a medal, finishing 4th in his M45 age category but was the 1st Welsh runner.

The elite standards were maintained throughout this marathon with winner Jake Smith finishing in 2.11.00, and he was only 38-seconds ahead of 2nd placed rival Callan Moody from Serpentine RC in 2.11.38, and 3rd man Reece Edwards from Belgrave Harriers in 2.14.43. 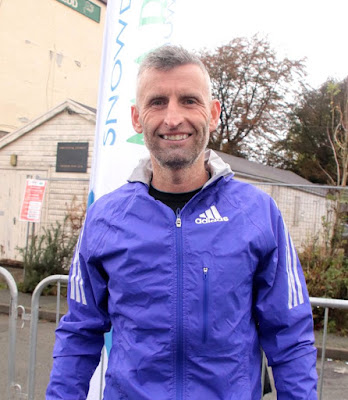 *Martin Green
Martin however, had some mixed feelings about his own brave performance but praised the organisers for their sterling efforts in finally getting a major live elite run under way, and was glad to return to major racing events.

After the event, he confirmed: ‘Well, it wasn’t what I wanted, but it is what I got. There’s nothing more humbling than the marathon and today was a great example. You can start thinking you’re something special and then you dragged back and down to earth in an instant.

‘The goal was 2.27, and I was definitely in shape for it, but it was just a little too warm and I am not good in the heat. I started off OK but knew after 3-4 miles that it wasn’t going to be my day.

‘What should have felt comfortable didn’t and I just kept getting swallowed up and spat out from group after group, which does nothing for the mindset. I’ve never wanted to quit more in a race than ever before but knowing the effort the organisers have gone through and knowing how blessed we were to get the opportunity, there was no way I was stepping off.

‘Looking at the splits they are quite consistent, it’s just they are erratically consistent, if that is even a thing. Usually pacing is my greatest strength but today I just had to do what I could do, get to the finish, and live to fight another day.

‘From where I was at half-way, I’m actually rather pleased with both the result and the fact that I did stick it out. The easy option would have been to stop, but running a marathon isn’t about the easy option. It’s a tough game and you rarely get the results you either want or deserve, but despite all that, I love this game and hopefully in the autumn in cooler weather, I will be back and run quicker than ever before.

‘Last and not least, such a huge thank you to all the organisers, especially Michael Harrington, who got this over the line despite obstacle after obstacle, you made a lot of people very happy today.’ 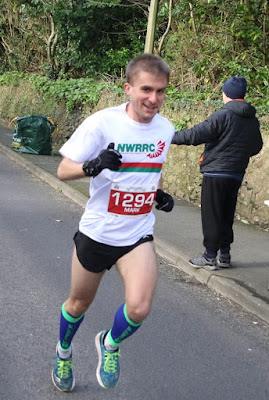 NWRRC athletes Mark Jessett and Rory Middleton also enjoyed their first ‘live’ race for many months as they competed in the Run Tatton (Park) half-marathon last Sunday, and Mark even celebrated with a magnificent personal best (PB) time.

Mark just dipped under his 80-minute target time, recording 1 hour 19 mins 40 secs in 45th place overall, and he was 14th in his V35 age cat. His colleague Rory also ran well in the warm Cheshire sunshine to finish 74th overall and he was 32nd in the tough senior man age category in 1.23.14. 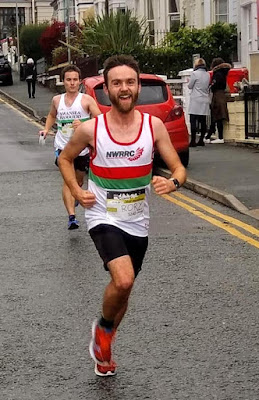 *Rory Middleton ran well at the half marathon